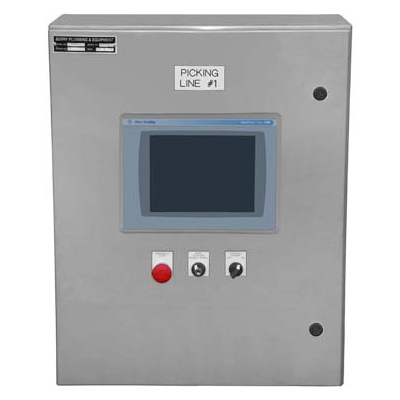 The Paw Recovery System is a system designed to track the chickens as the USDA grades them.

The chicken paws are also tracked and electronically tagged to their respective chicken. Should the chicken fail USDA regulations and be removed from the evisceration line, the paws from the same bird will be diverted by the paw harvester into a reject bin. The paws will only be rejected if the button, which is mounted at the USDA inspector station, is pressed. This allows paws to only be rejected for certain disease and thus maximize production.

The Paw Recovery System is composed of Station Brackets containing non-contact photoelectric and inductive sensors. The sensors verify chicken and / or shackle presence. Berry’s Paw Recovery Stations, mounted at various points along the picking and evisceration lines communicate to a central programmable logic controller (PLC) via DeviceNet. The DeviceNet is a “BUS” type networking comprised of one multi-conductor cable that supplies power and communications to the sensors. DeviceNet saves time in installation and reduces potential problems caused by wiring errors. Due to sensors communicating on a network, real-time diagnostics are available from each sensor. Diagnostics include photoelectric misalignment or dirty lenses, inductive sensors positioning, and faults status. The sensors also provide a heartbeat to continuously verify communication back to the PLC. The central PLC will be housed in an industrial enclosure (shown on front of brochure).

A touch screen is mounted on the front of the enclosure allowing setup and diagnostics of the system including alarm messages. The system tracks chickens and paws by counting parts into each transition and parts out of each transition. Each chicken and paw will be assigned a memory location in the PLC, which will follow the chicken and paw throughout the grading process. The system uses its sensors to verify that the tracking calibration is correct.